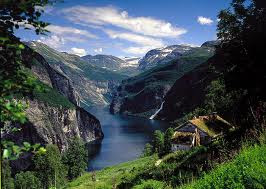 Norway! I knew it was the land of the midnight sun, Fiords and breath-taking scenery, but I had no idea what lay in store for us. I do not remember the exact year, but it was after London, so it was in the 70s. I believe we moved from London to Norway. Yes, we did, because Warren was still working in London with a transfer to Norway being made. We had our belongings packed up and shipped to Norway.

We did make the initial move together. We found a really nice home overlooking a Fiord. There was a huge room with big glass windows overlooking the Fiord.

We had been told that there was an American school in Bergen, but when we got there, we found that this was not true. To add to my suffering, Warren had been called back to London.

We found out that there was a school in Stavanger, so Warren moved us to Stavanger. I think we put our things in storage. I don’t remember. I do remember we were put up in a company apartment. So, there we were, just Mike and me on our own.

When I went to the school, I was told that they could not take any more students. The only option left was a Norwegian school that was housed in an old prison camp from WWII. You can’t teach an English-speaking kid in an all-Norwegian school!

Back to the apartment we went. There was a television there, but no programs in English. There was no phone and we didn’t have a clue about the language.

Day in and day out, I read paperback books and Mike built model airplanes. This went on for some time and there was no word about when Warren would join us. What to do?

When I made the decision to return to the states, we were out of there in a flash. We made a stopover in London to say goodbye to Warren and we headed for the good ‘ole United States of America!

Told by Judy McCoy
Posted by Viva McCoy at 6:25 AM