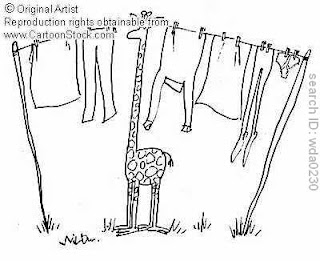 It was 1964 and I had just arrived in Venezuela with the boys. After about a month, our shipment arrived and in that shipment was a brand new bronze-colored washing machine! I had been washing all the clothes - including diapers - in the bathtub. My clotheslines were the tree branches and the bushes.

The minute that washer was unloaded and hooked up, I called Warren to tell him that I could really use some clothesline poles. That man sent his best workers to the house to set some poles for me and to string six lines up. I could hang six lines of clothes - was I excited? What do you think?

I watched as they set the poles and strung the lines. When they finished, they told me that I would have to let the cement harden for a couple of days. No problem! On the third day, I washed everything in the house - a few loads. Went outside with my tub of wet clothes and hung them to dry.

You should have seen me trying to get the wet clothes off the lines and then try to upright the poles. I scraped up dry cement off the ground and added water and tried to fix everything, but that was a losing battle.

When Warren came home and saw the tub of wet clothes and my face, he didn't have to ask what had happened!

The next day a big truck arrived with more workers - my poles were being set again! This time, they had extensions welded on them and they were sunk soooooooo deep that I just know China was looking at them!

Two days later I hung up six lines of clothes and watched happily as they fluttered in the wind!!

Warren would have done anything for me and he did!

True story by Judy McCoy
Posted by Viva McCoy at 7:43 AM