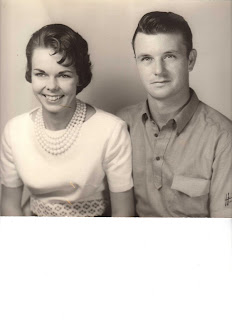 This picture was taken shortly after we married.  This is an eighteen-year-old girl and a twenty-one year old man.  We married in 1958 and this coming Thursday, July 19, 2013 would have been our 55th wedding anniversary.  We would have been married 42 years the year Warren died.  He was such a good father and husband.  He worked very hard all of his life for his family.  I was blessed to have him in my life.  We married for better or worse and we went through both good and bad times.  In sickness and in health took on a whole new meaning when he was diagnosed with terminal cancer.  He was a man until he took his final breath with me and the boys holding his hands.  You are missed, my love!