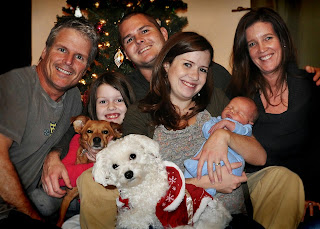 This is Mike and Tiffany McCoy's family. Missing are Maegan and BJ, but they will be in the next picture for sure.

Picture taken on December 17, 2011 at the home of Michael and Becca in Austin, Texas.
Posted by Viva McCoy at 7:19 AM No comments: 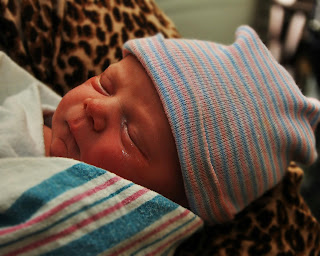 Posted by Viva McCoy at 9:12 AM No comments: 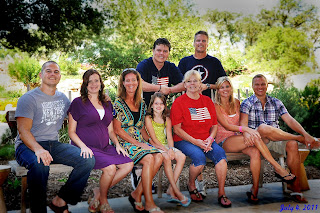 Today is July 19, 2011. On this day 53 years ago Warren and Judy McCoy married. This is the family that came from that marriage. 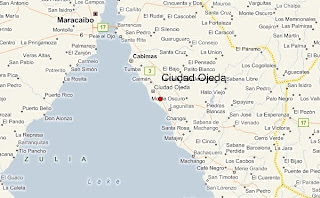 I wrote the following letter about our experience when we moved back to Venezuela in 1994 - we were there for one year. Not too much had changed from when we were there before!

I love and miss you Dad....Donny
Posted by Viva McCoy at 5:32 PM No comments: 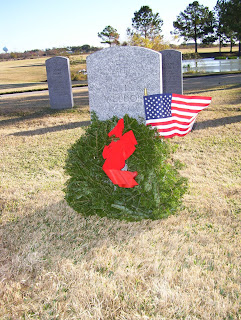 Today is March 22, 2011. Twelve years ago this morning, Warren went to Heaven. My heart still has a hole in it, but I remember him with love and respect. He was a great man, a wonderful husband and Dad. I know he is in Heaven waiting for me.
Posted by Viva McCoy at 7:18 AM 1 comment: 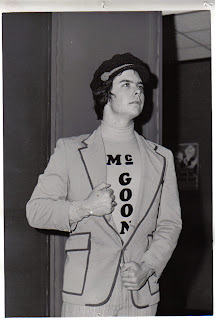 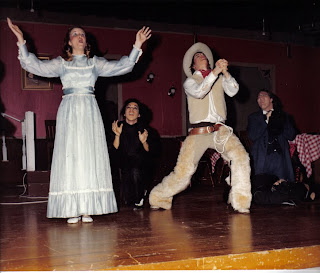 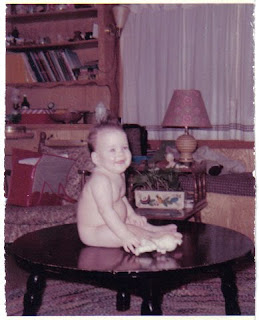 Michael Ray McCoy. Born May 7, 1963.
This was taken at his Grandmother's house in Pasadena, Texas.
Posted by Viva McCoy at 4:36 PM 1 comment: 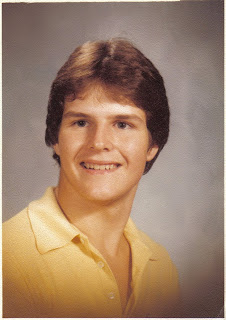 May, 1981
Michael Ray McCoy's senior picture. He graduated from Deer Park High School. He was on the swim team and the most awesome water-polo player. He was one of the best in the entire state of Texas.
Posted by Viva McCoy at 4:33 PM 1 comment: 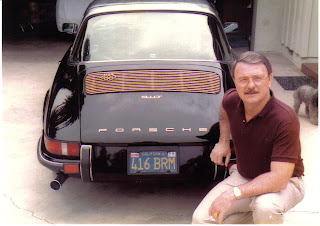 This was Warren's "baby" - his 1972 Porche. He loved this car but he did not love it more than family. He sold it to be able to put a down payment on a house for us. He was working and living in California when he bought this car - he managed to do that all on his own. He went to a bank, got the financing and made the payments from his per-diem money. He surprised me with this "secret" when he could no longer keep it a secret. Bless his heart!

Posted by Viva McCoy at 4:30 PM No comments: 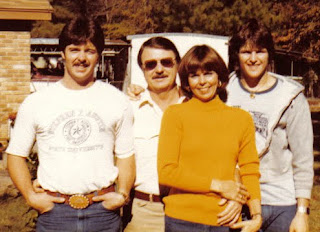 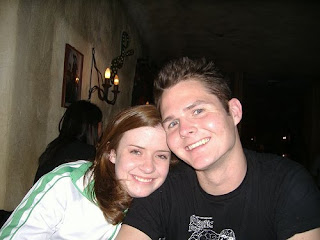 Michael and Rebecca Rice (McCoy)
Posted by Viva McCoy at 4:27 PM No comments: 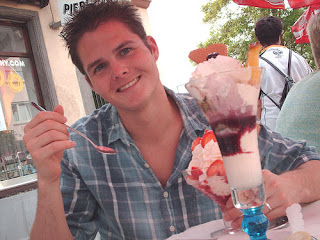 This is Michael Warren - he was named after his Dad, Michael Ray and his Grandfather, Warren Weldon.
Posted by Viva McCoy at 4:23 PM 1 comment: 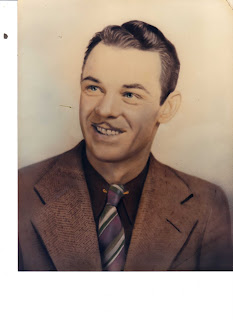 This was Donald Mack McCoy (Warren and Gene McCoy's Dad). He was born to George McCoy, age 23 and Bertha Ann Woods, age 18 on July 21, 1911. His birth certificate lists his father as a farmer and his mother a housekeeper. He was born in Lamar, Texas in Hughes County.
His had two grandsons - Donald Mack McCoy (named after him) and Michael Ray McCoy.
Posted by Viva McCoy at 2:42 PM No comments: 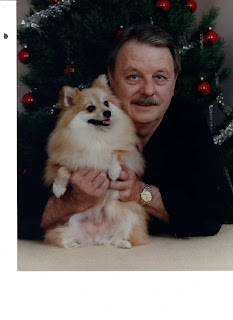 One of my favorite pictures! This was taken about 1989. Warren loved this dog. Trader was his buddy. The groomer we took Trader to took this picture one Christmas. Today is March 14, 2011 and I still cannot believe that both of them are gone. Trader died almost five years ago and Warren died twelve years ago the 22nd of this month. This was certainly a happy time in our lives and a cherished memory.

Posted by Viva McCoy at 2:36 PM No comments: 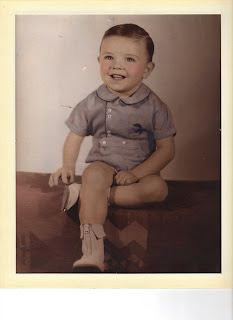 Looking at this precious, beautiful boy brings tears to my eyes. This is Warren Weldon McCoy and I am guessing he is about three or four here.
Posted by Viva McCoy at 11:23 AM No comments:

A Message From Heaven

After Warren died, I wondered what he would be thinking as he looked down on his family. I wrote this poem as though he were saying the words from Heaven. I found this poem tucked away in my baby book - I am pretty sure that I wrote it just after his death.

You'll find things missing in your life for a while,
Such as your happiness, your laughter and your smile.

Your days will be without purpose and your nights very long.
You'll feel that in your heart you'll never hear a song.

Our home will seem silent, empty and blue
Because I am no longer there with you.

But, my love, I am here to tell you these things will pass and go away
Little by little each and every day.

You will feel great comfort knowing I am preparing for our new and wonderful life,
Where you and I will eternally be husband and wife.
Posted by Viva McCoy at 7:12 AM No comments: 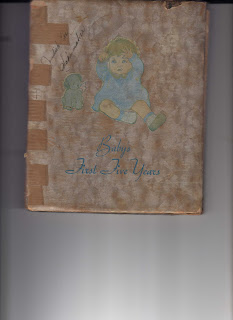 Born December 9, 1939 at 6:55 a.m. at the Mercy Hospital in Baltimore, Maryland. Doctor was J. Howard Burns. Weighed 8 lbs 3 oz and was 20" long. Her mom, Ursula William Sandridge, wrote the following comment: "Judy smiled when she was one day old. She has one dimple in the left cheek. A beautiful child!"
Was named Judith Lee Schumaker.
Mother is Ursula W. Sandridge. Grandmother is James William Ramsey and Grandfather is William Robert Sandridge.
Father is Lewis Paul Schumaker. Grandmother is Sara Bell Raikes and Grandfather is Charles W. Schumaker.
Judy's eyes were blue, hair was brown, brows and lashes were light and complexion was fair.
At nine months, she weighed 26 lbs and was 31" tall.
"Judy began crawling at the age of 9 months. She really does fly. Just gets around the house in a very few minutes. I'll be so glad when she walks, for she is so sweet".
"She took her first steps on November 17, 1940. She was so very proud of herself. Bless her little heart".
November 22, 1940: "Judy Lee walked by herself most all evening. She just staggers and wobbles. But bless her heart, she just keeps right on trying until she is exhausted."
Other notes from Judy's baby book: Made her first trip from Baltimore to Washington, D.C. at two months. When she was nine months old, she had her first train ride from Charlottesville, VA to Houston, Texas. She first grasped a small rattler and a chain of blue beads. She chews on it and plays all day. Judy follows me with her eyes where ever I go. Judy now calls me Mummie. She tries so hard to talk. Judy couldn't get over people wearing glasses. She likes all the men. The colors of the funny papers certainly amuse her. On September 6, 1940 her Mom wrote that Judy now had six teeth and loves to eat. On October 28, 1940, she wrote that Judy now has eight teeth and is getting to be quite a lady. On May 20, 1940 Judy put my finger in her mouth and bit it. She is very proud of it. Judy had a grand birthday. I hope and pray she may have as many more as happy as her first."
Posted by Viva McCoy at 3:06 PM No comments: 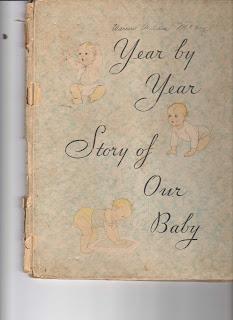 Warren's mother had a baby book for him and she filled in some of the pages.

Born October 28, 1936 at 10:55 p.m. at the Pampa Jarrett Hospital in Pampa, Texas. Doctor was A.B. Goldson. He weighed 7 lbs 7 oz. Eyes were blue, hair was brown and lashes were brown. He had a fair complexion. He held his head up at 1 1/2 months. He was told his prayers at age five and he repeated them at age five.

She wrote the following poem on the "First Birthday" page:

"I know a little blue-eyed boy. A lad just one year old.
But the captivating charm of him I fear cannot be told.

Of teeth, he hasn't many and his words are few.
But he has a way of making a willing slave of you."
Posted by Viva McCoy at 2:52 PM No comments:

Warren was in Cabimas, Venezuela. The boys and I were at 2411 Rosemead in Pasadena, Texas. Mike was not quite a year old and Donny was almost five. Here is the letter Warren wrote - it is dated March 11, 1964.

I tried to write a letter last nite, but remembered the post office is closed today. This is Wednesday and we are not working today. They are swearing in their new president and declared today a national holiday. So, I get a day of rest but will have to work Saturday. These people die, but they don't die because they are overworked. I'd say they are just plain lazy.

I got the letter with the pictures in it. They are real good. Your letters and pictures sure help. The boys sure look good. I'll bet they are really growing. The car looks good too. Oh, the license receipt should be with the rest of the papers. If it's not, call Cole and he'll help you. 12 1/2 miles to the gallon? That's not good. When I checked it last, it was around 16. Don't worry about it. Tell Benjie and Billie I think their car is real pretty..

Well, it's been two months and one week since I saw you last, Darling. Seems longer than that. I'll damn sure not going to leave you again. I miss and love you too much and it's not worth it. I'm not making much money anyway. Baby, don't ever think I don't love you. You and the boys are my whole life. I won't be too much longer, I hope.

I don't know if Daddy is coming home or not. He sure needs to. He hasn't felt well since he's been here and he's gotten very quiet. I just don't know. I agree with you, he shouldn't feel sorry for himself.

Darling, I miss you very much. Sometimes I get very depressed and miserable. I love you with all my heart. Don't ever stop loving me. What more can I say? Just telling you I love you doesn't seem like enough. I sure would like to show you.

Well, Charlie Martin is supposed to come in tonight. Guess I'll get my glasses tomorrow. I need those shirts also.

Honey, I guess I'll close for now. My head is all stopped up and I can't breathe so good. Another damn head cold, I guess.

Kiss our boys for me and tell them I love them. Tell Donny to be real careful on that bicycle.

I love you, miss you, long for you and I am homesick. Keep loving me and it won't be long. Goodnight Darling. I'll be dreaming of you.

With All My Love, All the Way. Me
Posted by Viva McCoy at 2:26 PM No comments: 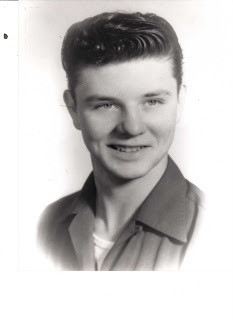 Warren was about 17 (1953) when this was taken. Don't you just know that he thought he would live forever? What an awesome man!

Posted by Viva McCoy at 1:41 PM No comments:

In Memory of Valentine's Day 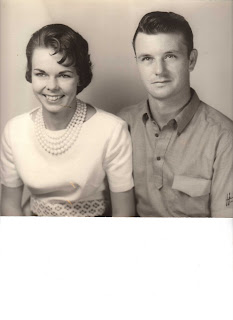 Warren and Judy McCoy
Taken August, 1960. We had been married just over two years. We were proud parents of Donald Mack McCoy.
Posted by Viva McCoy at 4:51 AM No comments: 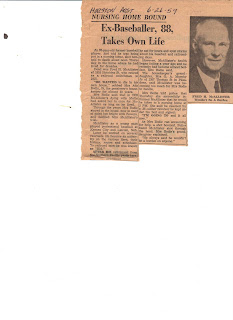 This was in the Houston Post after Mr. Mac killed himself.
Posted by Viva McCoy at 12:19 PM No comments: