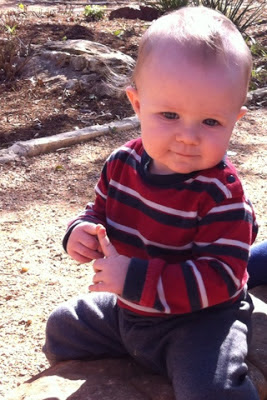 For the record, this is Connor Warren (McCoy) Rice.  Warren and Judy McCoy's great grandson.  Suzie (his Mom) and Michael Ray (his Dad) married when they were 16 and 18.  They had a son (Michael Warren).  Sadly, the marriage ended when Michael Warren was very young.  He was adopted by Suzie's new husband (David Rice). The years in between are not important.  What is important is that Michael Warren and his wife, Rebbeca are fantastic parents to Connor.  There is a great relationship between Michael Warren and his Dad, Michael Ray.  This child would have been the apple of Warren McCoy's eye, had he lived to see him.  I can see Warren in the face of this beautiful child!

When Connor was born, it was only right that he have the same last name as his step-dad, which is Rice.  In memory of Warren McCoy, Michael and Becca chose Warren as Connor's middle name.

My wish is that when Connor is grown, he will be told about his great grandparents and the McCoy family.  This child is a blessing to our family and I love him so much.
Posted by Viva McCoy at 6:35 AM